First: how can Alternative History be defined?

The Collins English Dictionary defines alternative history as “a genre of fiction in which the author speculates on how the course of history might have been altered if a particular historical event had had a different outcome.”

These stories usually contain “what if” scenarios at crucial points in history and present outcomes other than those in the historical record. The stories are conjectural, but are sometimes based on fact. Alternate history has been seen as a subgenre of literary fiction, science fiction, or historical fiction; alternate history works may use tropes from any or all of these genres.

My first exposure to Alt History was “Guns Of The South” by Harry Turtledove. From Wikipedia:

In January 1864, the Confederacy is on the verge of losing the war against the United States. Men with strange accents and oddly mottled clothing approach Robert E. Lee at the headquarters of the Army of Northern Virginia, demonstrating a rifle far superior to all other firearms of the time. The men call their organization “America Will Break” (or “AWB”). They offer to supply the Confederate army with these rifles, which they refer to as AK-47s. The weapons operate on chemical and engineering principles unknown to Confederate military engineers. The AWB establish a base in the little town of Rivington, North Carolina, making it into a combined fortress and arsenal.

The books continues with an adverture/military thriller plot.

The fictional town of Grantville, West Virginia (modeled on the real West Virginia town of Mannington) and its power plant are displaced in space-time, through a side effect of a mysterious alien civilization.[2]

A hemispherical section of land about three miles in radius measured from the town center is transported back in time and space from April 2000 to May 1631, from North America to the central Holy Roman Empire. The town is thrust into the middle of the Thirty Years’ War, in the German province of Thuringia in the Thuringer Wald, near the fictional German free city of Badenburg. This Assiti Shards effect occurs during a wedding reception, accounting for the presence of several people not native to the town, including a doctor and his daughter, a paramedic. Real Thuringian municipalities located close to Grantville are posited as Weimar, Jena, Saalfeld and the more remote Erfurt, Arnstadt, and Eisenach well to the south of Halle and Leipzig.

Grantville, led by Mike Stearns, president of the local chapter of the United Mine Workers of America (UMWA), must cope with the town’s space-time dislocation, the surrounding raging war, language barriers, and numerous social and political issues, including class conflict, witchcraft, feminism, the reformation and the counter-reformation, among many other factors. One complication is a compounding of the food shortage when the town is flooded by refugees from the war. The 1631 locals experience a culture shock when exposed to the mores of contemporary American society, including modern dress, sexual egalitarianism, and boisterous American-style politics.

Dr. Flint is a historian, so he was able to both make the middle ages interesting as well as historically accurate. (Well, except for the part where part of West Virginia plops into the Thirty Years’ War).

Warning: reading Alternative History can get one interested in real history.

So back to the question: Why read Alternative History?

Okay, I can’t leave you without mentioning another Alternative History series. Jasper Fforde’s “Thursday Next” series.

Okay, there’s less “alternative” than fun in this series. But it got me into writing…as I figure the author must have really had a lot of fun writing this series.

Not to worry: I’m not gonna kidnap anyone out of their book.

Questions and comments to walt@waltsocha.com

Most of the action in book three, “Collapse,” (of my Crossover series) takes place on Isla Cerritos, which was a trading port connected to Chichen Itza. An artifact illustrates the importance of trade:

Artwork showing the importance of trade

An obvious question: what is/was the terrain of Isla Cerritos? And what was the appearance then as well as now?

Luckily, there have been several archaeological projects done on that island. I found the following reports to be very helpful:

And while the island is hard to get to, a visit was photographically documented in the following article:

The island is small and only a few meters (my characters are starting to use the measurement “strides” which is about a meter) high:

View of Isla Cerritos (from the infomaya.jp article)

It is thought that the island was “mined” for the stone after it was abandoned (When? Probably when Chichen Itza fell around 1200 CE or so). So today, there’s not much remaining:

Remains of foundations on Isla Cerritos (from the infomaya.jp article)

So we know it’s a small island, not very high. But what did it look like in the 11th century? Here’s where literary license (and a lot of reference books) come into play. Surata (Brent’s daughter!) made this drawing as they approached the island:

While on the island, Brent made this rough sketch: 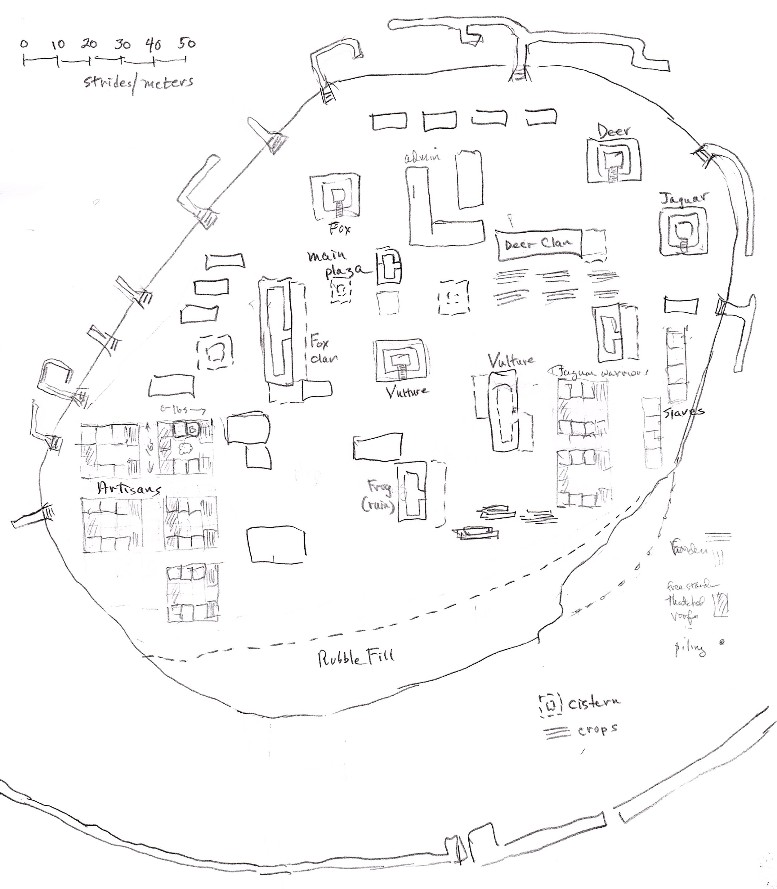 Brent’s sketch of Isla Cerritos in the 11th Century

Fox, Vulture, Deer, and Jaguar are the names of the elite clans/families who run this trading island.

Caveat: Brent and Surata are likely to improve their sketches.

The name “Isla Cerritos” is Spanish. I’ve tentatively called it “Turtle Island” in the book. Any suggestions as to a better name?

Interested in the Maya? Allow me to suggest: “Maya to Aztec: Ancient Mesoamerica Revealed” by Dr. Edwin Barnhart (put out by The Great Courses). A great primer! 48 lectures on 8 DVDs. (It’s probably in your local library).

The first book in the Crossover series, “Conflict,” is permafree at:

The print version of second book in the series, “Contact,” is now available (both eBook and Print are exclusive at Amazon).

Signup (above) for Walt’s newsletter to get the latest on his characters’ journey into the indigenous cultures of the 11th Century!